This past weekend marked 10 years since Adobe’s $1.8bn purchase of Omniture, the deal that arguably started the race among enterprise software vendors to build out customer experience software portfolios. Although that transaction marked the beginning, its decennial looks like the beginning of the end. While we tracked a record haul for customer experience software M&A in 2018, those companies are becoming increasingly harder to sell.

According to 451 Research‘s M&A KnowledgeBase, buyers spent $29.6bn in 2018 on vendors developing software for advertising, marketing, customer service, e-commerce and other forms of customer engagement. So far this year, just $8.3bn has been spent on such targets, on pace for the lowest annual total since 2015. Moreover, we’ve seen just five companies in this space sell for $200m or more, while each of the six previous full years have seen at least 10 deals of that size.

And the multiples on those acquisitions have fallen dramatically, our data shows. Last year almost every vendor in the category selling for that amount blew past the 5.2x trailing revenue that Omniture commanded. This year, however, such transactions fetched a median valuation of 2.3x, which is at least a full turn lower than the median valuation of similar deals in any single year over the past decade. This year, Dynamic Yield and TrendKite nabbed north of 8x in their respective sales to McDonald’s and Cision, while none of the other $200m cohort printed above 2.5x.

There’s little doubt that Adobe has seen success with its Omniture buy. The company expects to grow its Digital Experience business, the unit that houses Omniture (now Adobe Analytics) and several other related targets, by 23% to $3bn in the soon-to-close fiscal year. But other early, marquee investments in this sector weren’t as successful and there may not be as many deep-pocketed buyers as there once were. Both IBM and Teradata, for example, shed their marketing software units. Meanwhile Oracle, which still ranks as the most prolific acquirer in the segment, only printed one deal last year and none in almost 18 months. 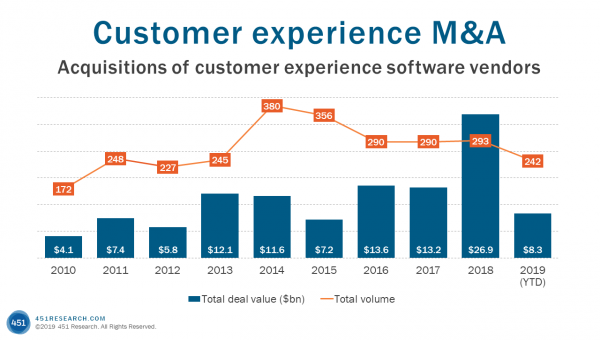