Just as customers often find that they need help in getting to the cloud, companies supplying some of the underlying cloud technology often need a boost to get there, too. Historically, that has meant the odd shopping trip for a key bit of technology. Now, however, there’s a new urgency to that shopping, as cloud edges toward being the most-popular place for companies to run their business.

As a result, acquisition activity this year in the cloud-enabling technologies market has already shattered the previous annual record, according to 451 Research‘s M&A KnowledgeBase. Our data indicates that 2019 is on pace for more than twice the second-highest annual total of deals.

The unprecedented deal flow in the rapidly emerging sector has been driven by a number of well-capitalized buyers that are anxious to stay commercially relevant to customers amid the tectonic IT shifts. This is important because the move from on-premises to off-premises will literally swing billions of dollars in IT spending, with a follow-on impact on billions of dollars in market capitalization.

Consider Splunk, a highly valued, 16-year-old vendor that itself has been progressing along a transition to a cloud delivery model for several years. Never a big buyer, Splunk has nonetheless notched two acquisitions in just the past month, including its largest-ever purchase, to help extend its core monitoring capabilities to the cloud.

In addition to making sure workloads run smoothly in the cloud, making sure they run securely has also been a major driver of recent cloud-enabling technology deals. VMware, McAfee and Palo Alto Networks have all announced cloud security transactions in the past few months. Concerns about security perennially top the list of reasons IT professionals tell us why they have reservations about moving to the cloud.

But overall, concerns about cloud are dwindling. A survey earlier this year by 451 Research of more than 500 IT buyers and users found that a slight majority (55%) of them said the primary venue right now for workload execution is ‘on-premises,’ with the remaining 45% identifying ‘off-premises’ as the main location. Two years from now, however, some flavor of cloud or hosted offering will be the primary home for two-thirds of the workloads, according to our Voice of the Enterprise: Cloud, Hosting and Managed Service survey.

For more on these trends and how companies are positioning themselves – both organically and inorganically – to take advantage of them, be sure to join us at our annual Hosting & Cloud Transformation Summit (HCTS) next week. Now in its 15th edition, 451 Research’s HCTS not only focuses on the technology impact of cloud and the broader digital transformation of business, but also brings a financial perspective to how those trends are playing out for both suppliers and customers. 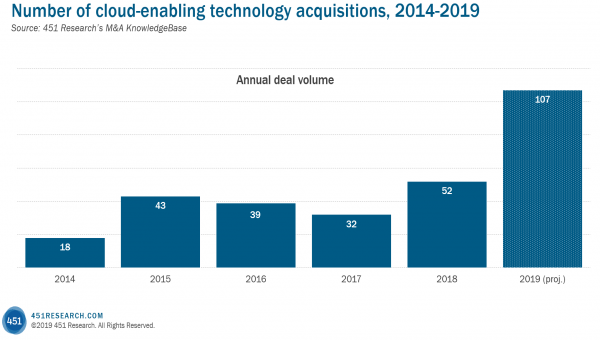