A new breed of highly valued startup with the scientific name canis lupus unicornus has been spotted for the first time on Wall Street. Investors discovered the species as Datadog came to market and secured a stunning, multibillion-dollar valuation from the first trade. Unlike some of the other unicorns that have been trotted out recently, however, Datadog actually comes with a sturdy and attractive pedigree.

As we noted in our full preview of Datadog‘s offering, the infrastructure monitoring vendor has been extremely efficient in building its business: It burned through just $120m on its way to creating a company that is running right around breakeven even as it posts roughly 80% growth. We pencil out that its sales will be in the neighborhood of $350m in 2019, up from $200m in 2018.

Public market investors backed Datadog’s fast but fiscally responsible growth, pushing shares up to $40 in initial trading from the above-range price of $27. With an (undiluted) count of about 290 million shares outstanding, the vendor is valued at nearly $12bn. That puts Datadog’s price-to-trailing-sales multiple in the mid-40s, roughly matching the valuations of this year’s other high-flying IPOs, CrowdStrike and Zoom Video Communications.

Datadog’s IPO also vaults it ahead of virtually all of the companies it bumps into in what is an already a high-priced sector:

The vendor is trading at more than three times the value of rival New Relic, which has had a stumble recently.

It is worth almost as much as Dynatrace and Elastic combined.

And it is closing in on the market cap of Splunk, which will generate more than $2bn of revenue in its current fiscal year. 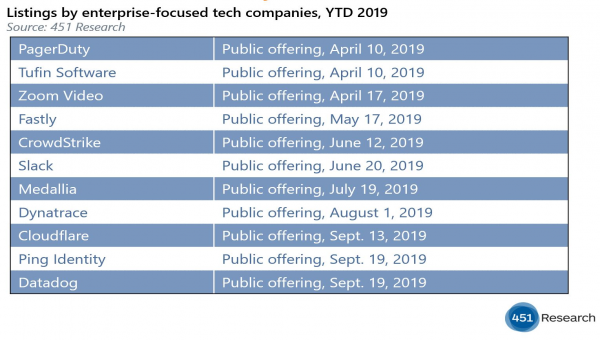