Cloudflare, a network control specialist that unveiled its IPO prospectus this week, will need an enthusiastic reception to get over an already-rich private valuation and an uncomfortable comp. Through 2019, Wall Street has greeted new offerings from enterprise technology vendors with enthusiasm, extending double-digit valuations on the opening days of all new issues. And while there still seems to be plenty of appetite, the enthusiasm has tapered a bit with recent declines in the equity markets.

As Cloudflare looks to debut, it boasts 48% year-over-year topline growth through the first half of the year. And like all startups, that growth comes at a cost. In cranking out $234m in trailing revenue, the company chalked up a $91m loss, with few signs that it will be approaching profitability anytime soon. Unusually, it’s a surge in Cloudflare’s G&A expenses, not only sales and marketing costs, that’s eating away at profitability. In the first half, its G&A expenses were roughly equal to its R&D costs, each of which is about half of the $67m it spent on sales and marketing.

As we noted in a recent report on B2B tech IPOs, all recent issues have come to market with valuations north of 10x trailing revenue. And although most still trade well into double digits, the market has cooled a bit. Of the eight such offerings this year, five are down 10% or more from their opening prices. Even so, the valuations are still generous. Take Slack, for example. It’s down about 20% from its first day and trades at 38x trailing revenue.

For Cloudflare, though, the least generous valuation from this year’s crop belongs to a fellow networking services firm. Fastly, Cloudflare’s competitor in the CDN sector, is one of the few that trades with a multiple that’s in single digits after a 35% decline since its opening day in May. While Fastly trades at 7.5x, Cloudflare will need to get above 12x to top the valuation from its series D round. Despite a 5% dip in the S&P 500 this month, it should still get there. Cloudflare is about 40% larger than its rival, growing 10 percentage points faster and targeting a larger slice of the networking market. 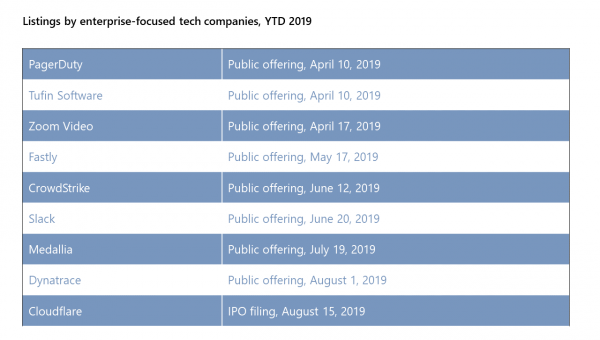