In the tech IPO market, selling to businesses is proving to be a good for business. Enterprise-focused companies have already created some $75bn of market value so far this year. And at least another $10bn is likely to get heaped on to the pile, as two startups selling into valuable segments of the IT market get set to hit Wall Street. Ping Identity and Datadog both filed their IPO paperwork late last week.

The market for B2B offerings is so strong that companies and their underwriters are working through the traditional summer holiday period. Why are the current batch of IPOs getting fast-tracked? One contributing factor is rising volatility and uncertainty on Wall Street.

A recent survey by 451 Research‘s Voice of the Connected User Landscape (VoCUL) showed investors are increasingly worried about Wall Street. One-quarter of the respondents to last month’s VoCUL survey said they are more pessimistic about the current direction of the US equity markets than they were 90 days ago. The number of bearish respondents topped the 20% of respondents, who said they are more confident in the outlook.

Despite the gloomy forecast, Cloudflare put in its prospectus in mid-August, which was followed by two other startups throwing in late last week to join the ranks of the publicly traded tech companies.

Ping Identity: Ping is set to come public after an unusual private equity-backed recapitalization. Vista Equity‘s acquisition of the federated identity provider is also likely to prove lucrative, with Ping expected to be valued at five or six times the $600m that Vista paid three years ago. (451 Research will have a full report on the company and the filing on our site later today.)

Datadog: Already a unicorn in the private market, Datadog has pulled off the difficult – but highly valuable – trick of fast growth without huge losses. The IT monitoring startup is almost doubling revenue while approaching profitability. (451 Research will also have a full report on the company and the filing on our site later today.)

These B2B companies are proving a lot more attractive to IPO investors than the B2C companies that have already hit the market or are set to debut soon. For instance, Uber, which just reported a $5bn loss for the most recent quarter, is still below its offer price.

And even more red ink is set to gush in the consumer-tech IPO pipeline, with next month’s expected offering by the company behind WeWork. The We Company is, of course, a real estate operator. But it is nonetheless trying to pass itself off as a technology company, using the word ‘technology’ almost 100 times in its recently filed prospectus. However, no matter how glowingly it describes its business (‘space as a service’) or its mission (‘elevate the world’s consciousness’), it’s hard to imagine Wall Street buying into it. 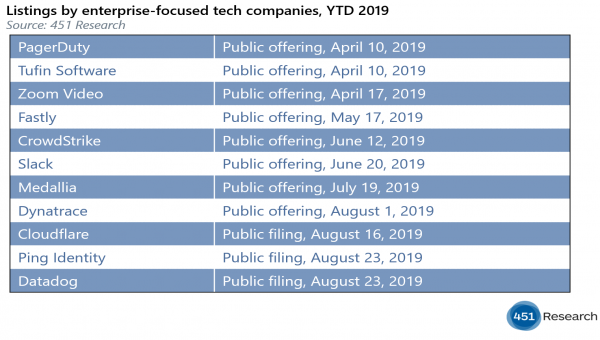