In selling Refinitiv to London Stock Exchange (LSE) Group for $14.1bn in stock, Blackstone Group has managed the largest-ever sale of a PE-backed tech company. The deal comes amid an overall decline in PE exits, particularly among the largest assets. Although the shifting PE exit environment isn’t a dramatic swing, it’s notable given the rise in PE acquisitions in recent years.

The transaction values Refinitiv, a financial markets data provider, at $27bn when factoring in its debt. That’s nearly $4bn less than where the company was valued when Blackstone and two co-investors spun it off of Thomson Reuters last year, paying $17bn for 55% of the business. That’s not to say Blackstone is losing money on the deal – it put in $3bn of its own cash and will get more than that in LSE equity. Moreover, it won’t begin selling any of those shares for at least two years after the close, so its ultimate exit is still a ways off.

Still, in announcing such an exit, Blackstone’s an outlier. According to 451 Research’s M&A KnowledgeBase, PE firms have sold 156 tech vendors since the start of the year, approximately the same rate of exits as 2017, but 22% lower than 2018 – a record year for PE exits. The decline is more significant among larger deals. Our data shows that buyout shops have divested just nine companies (including Refinitiv) for $1bn or more this year, on pace for the fewest such exits since 2014.

The buyer it found is as remarkable as the record price it fetched in the sale of Refinitiv. LSE hasn’t spent more than $1bn on a tech purchase since 2007. And more broadly, strategic acquirers have only bought six $1bn PE portfolio companies this year. In 2018, they provided 20 of the 31 PE exits valued above $1bn.

The slowdown in exits comes as sponsors have expanded their pace of $1bn-plus acquisitions of tech companies. According to the M&A KnowledgeBase, PE firms have inked at least 25 10-figure tech transactions in each of the past three full years, whereas they would typically print 10-15 such deals in each of the years from 2010 to 2016. Blackstone, due to a lockup agreement as part of today’s announcement, will have to wait at least five years before fully exiting its position. But if current exit trends hold, many of its peers could be awaiting 10-figure exits for just as long and with far less certainty. 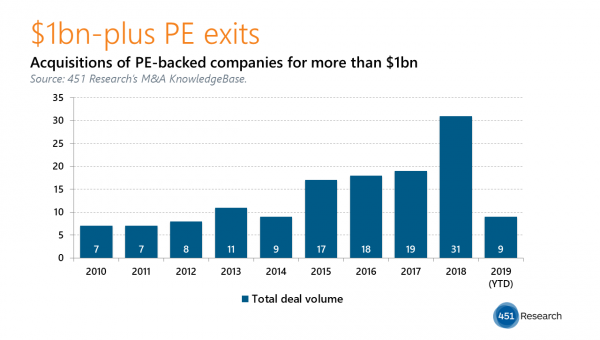