Big things are forecast for the Internet of Things. IoT spending is expected to nearly quadruple over the next five years, topping a half-trillion dollars. To get a place in that massive market, acquirers have gone on an unprecedented shopping spree so far this year.

Already in 2019, tech titans including Microsoft, Intel and Facebook have picked up some ‘things.’ Altogether, 451 Research‘s M&A KnowledgeBase lists more IoT transactions in the first 10 months of this year than any other full year in history. Overall, our data shows 2019 deal volume in the sector will roughly double from 2014, while soaring tenfold from the start of the decade, when the IoT trend was first taking off.

To look deeper at the rapidly emerging IoT market, 451 Research will be hosting a special event next week focused on the technology and implementation trends that are spurring the record M&A activity. (Clients can register for our Cycle of Innovation Summit in Boston next Tuesday morning (11/5) on the event’s website.) During the Summit, we will be highlighting a number of key forecasts for the IoT market, including:

Right now, more than four of 10 IT professionals (43%) tell us they already have IoT technology deployed, according to a recent survey from 451 Research‘s Voice of the Enterprise: Internet of Things, Organizational Dynamics 2019. Further, almost as many survey respondents (39%) say they either have a proof of concept ongoing or will have something up and running within the next year.

As to what those future IoT deployments will be doing, the market for ‘things’ is going to tip heavily toward businesses in the coming years. The current IoT sector is evenly split between consumer and business, according to a recent 451 Research Market Monitor study. However, as more industries connect more of their business, our Market Monitor forecasts the B2B IoT segment will grow at twice the rate of the B2C IoT sector. By 2024, enterprise spending will account for 70% of the overall IoT market, with consumer spending just 30%.

Again, we look forward to seeing many of you – investors, IT professionals and entrepreneurs – at our Cycle of Innovation Summit in Boston next week, as we look at how companies are building value in the IoT market. 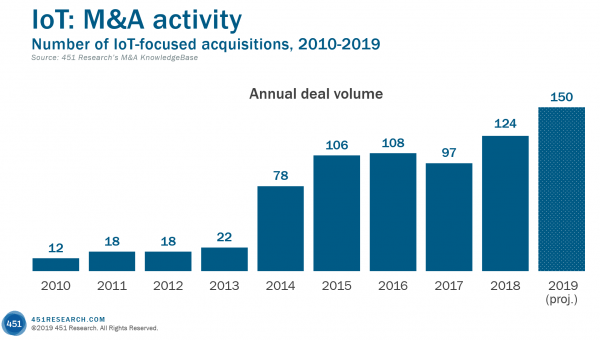