As the first half of the year comes to a close, the accelerating pace of machine learning (ML) M&A continues. But what’s changing is the rationale behind many of those acquisitions. Buyers are less interested in picking up ML teams and tech to build broad capabilities. Instead, they’re gravitating toward targets that have specific expertise or technologies to fill product gaps.

Each year since 2013, when 19 companies developing ML technologies or products were acquired, the number of such deals has risen by about 50% annually. According to 451 Research’s M&A KnowledgeBase, 124 vendors developing ML technology have been purchased so far in 2019, compared with 159 in all of 2018, on pace for a 55% rise. Yet buying machine learning for machine learning’s sake has declined.

Take the example of Salesforce. By our count, it acquired nine ML providers between 2014 and 2016 as it built Einstein, a platform to incorporate ML across its software portfolio. It has grown more selective since, nabbing just two such companies in the two and a half years that followed. Similarly, from 2014 to 2016, IBM purchased eight ML vendors to bolster its Watson brand, although none since.

More commonly, acquirers are turning to ML to solve particular problems. In marketing and advertising tech, for example, there have been a streak of acquisitions of firms that use ML to track audiences across multiple marketing channels. LinkedIn snared Drawbridge to improve its ability to match mobile and web users to a single profile and AdRoll reached for X-ID to do the same as audiences move between mobile web and mobile apps.

Most recently, LiveRamp paid $150m for Data Plus Math to build audience profiles across different video-streaming devices (laptops, mobile, connected TV, etc.) That deal, which brought a team of 25 to LiveRamp, demonstrates that buyers, although they may be more discriminating about the technology, are still paying a premium for ML providers. According to the M&A KnowledgeBase, machine learning targets (many of which are pre-revenue or early-revenue businesses) often fetch $1-2m per employee, compared with about $500,000 for a typical tech transaction. 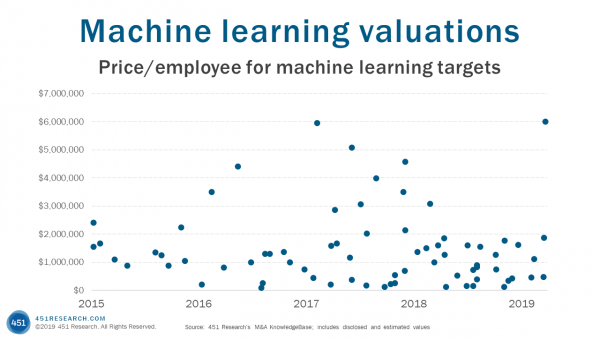