Tech acquisitions by private equity (PE) firms have softened a bit from a record 2018 (a development we covered recently) as sponsors take on new platforms at a slower pace. But purchases of bolt-on assets for the platforms they already own haven’t meaningfully declined. And as data from our recent M&A Leaders‘ survey suggests, the shift toward more additive acquisitions by buyout shops could well expand into 2020.

According to 451 Research‘s M&A KnowledgeBase, PE firms are on pace to print just 1% fewer bolt-on deals than they did last year, while acquisitions of new platforms are falling short of last year’s total by about 5%. Most recently, we’ve seen a surge of such transactions since the start of the quarter – just this week we’ve logged 13 of them, including DoubleVerify’s pickup of Ad-Juster. That deal by the Providence Equity Partners portfolio company marks its third of the year (it had only made one purchase in the decade before Providence Equity bought a majority stake in the ad-tech vendor in 2017).

Bolt-on acquisitions have become a regular feature of PE tech transactions as more firms have gravitated toward buying high-priced growth companies, and then using additional deals to augment revenue expansion and lower the effective multiple paid for the platform. According to our data, the median multiple paid for a platform acquisition hit 4.4x trailing revenue last year, while the median price for a bolt-on was a turn lower.

As they have already done this year, buyout shops could turn more toward adding to existing portfolio companies and away from reaching for new ones as they become sensitive to price. In our recent M&A Leaders‘ survey, 80% of respondents partially blamed rising valuations for the slowdown in PE purchases this year and 56% of them expect PE deals to carry lower multiples in the next 12 months. Just 7% anticipate increasing multiples in PE transactions. 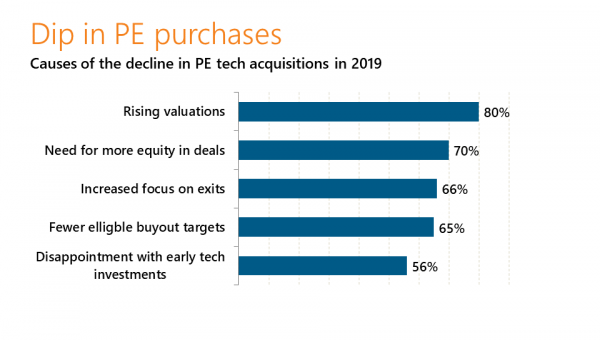