The tech IPO parade continues, but with a twist. Rather than having its journey to Wall Street backed by truckloads of venture dollars, the first enterprise-focused company in the second half of 2019 to put in its S-1 is coming from a buyout portfolio. Dynatrace is a private equity-backed spinoff, not a VC-backed startup.

The planned offering by Dynatrace would be the latest move in a rather unconventional journey to the public market by the application performance monitoring (APM) vendor. Founded far from Silicon Valley, Dynatrace got its start in the sleepy Austrian town of Linz in 2005, taking in only $22m in funding before exiting to Compuware in July 2011 for $256m, or 10x invested capital.

Compuware itself was taken private by buyout firm Thoma Bravo three years later for $2.5bn, which, at the time, represented Thoma’s largest single transaction. Shortly after, Thoma spun off Dynatrace from its one-time parent and consolidated its new stand-alone APM holding (Dynatrace) with an existing one (Keynote Systems, which Thoma took private for $395m in June 2013).

After all that addition and subtraction, Dynatrace now looks to debut on Wall Street. That’s a trick that rival AppDynamics wasn’t able to pull off because Cisco Systems snapped the venture-backed company out of registration. Assuming Dynatrace does make it public, it would mark the first IPO in the fast-growing sector since New Relic went public in December 2014. (New Relic currently sports a $5bn+ market cap.)

But it certainly won’t be the last. Dynatrace’s sometime rival Datadog, which has raised $148m in venture backing, is thought to be eyeing an IPO of its own. (Subscribers to the Premium edition of the 451 Research M&A KnowledgeBase can see our full profile of Datadog, including our proprietary estimates for revenue for the past two years.) Meanwhile, subscribers to 451 Research’s Market Insight service can look for our full report on Dynatrace’s proposed offering on our site later today. 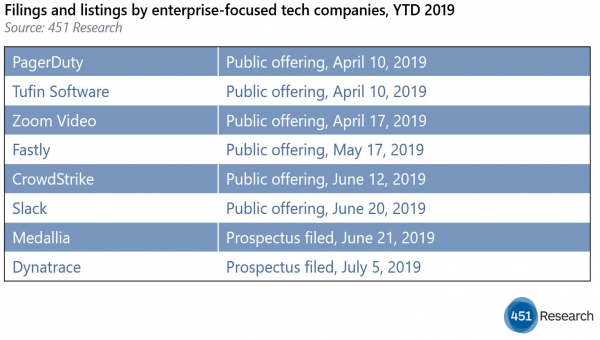