Buyout shops aren’t buying like they have been. After seven consecutive years of increasing the number of tech acquisitions they announce annually, private equity (PE) firms are on pace for a slight decline in 2019. The slowdown comes as the formidable buyers also start to scale back their purchases, shopping much more in the midmarket than in the billion-dollar range.

As we noted in our full report on tech M&A in Q2, we recorded an uncharacteristic drop in the number of announced deals in the April-June period by buyout shops, which had been the sole ‘growth market’ in tech M&A recently. PE firms have doubled their number of tech transactions in the past five years, but in Q2, they posted a second consecutive year-over-year quarterly decline in deal volume, according to 451 Research’s M&A KnowledgeBase.

To be sure, we don’t want to overstate the slight decline in PE activity. Based on midyear projections, between direct investments and bolt-on acquisitions by portfolio companies, deal volume for financial acquirers looks likely to drop about 6% in 2019, compared with 2018. Buyout shops still account for about one of every three tech acquisitions, our data indicates.

Within that slight decline in the number of prints, however, is a much more significant shift in where they are looking. PE firms are moving down-market in 2019, no longer looking to bag elephants. (Our Q2 report examines this trend in much more detail, as well as compares acquisition activity by financial buyers with their strategic rivals.)

Assuming the first-half pace holds, buyout shops are on pace to ink one-third fewer billion-dollar deals in 2019 than they did in 2018. So far this year, the M&A KnowledgeBase has recorded just 11 purchases by financial acquirers valued at more than $1bn. That’s the fewest big prints for PE firms in the first half of any year since 2015, when PE held just a mid-teens percentage share of the tech M&A market, or merely half its current level. 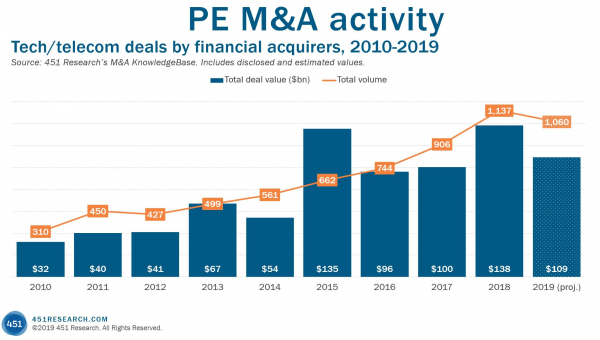