Google has jumped into wearables with the $2.2bn pickup of Fitbit. But don’t expect the buyer, which makes almost all of its money from search and advertising, to invest heavily in turning around the fortunes of the beleaguered fitness tracker. Instead, expect it to follow the same plan as it did with Motorola – use the target’s team, tech and assets to make products that show other hardware vendors what can be done with Google’s OS software.

Our surveys show that Fitbit remains the leading maker of fitness trackers, although by any measure the company’s best days are behind it. Its topline expanded just 5% in the most recent quarter and its stock has tumbled from nearly $50 per share in the weeks after its 2015 IPO (Google is paying $7.35 per share). According to 451 Research‘s VoCUL: Endpoints & IoT, Consumer Wearables report, planned purchases of fitness trackers have steadily declined since mid-2017, dropping to 3% in our August reading. And within the category, Fitbit is losing ground – just 20% of those planned purchasers said they intend to buy a Fitbit, down from 37% a quarter earlier.

In smartwatches, Fitbit hasn’t become a formidable presence. Fewer than 2% of planned smartwatch buyers have their eye on a Fitbit, compared with Apple’s 74%. It’s the former company’s lead that has compelled Google to make a move here. With the purchase of Fitbit, which itself had bought Pebble, a pioneer of the smartwatch category, Google could attempt to develop watches that highlight the capabilities of Wear OS (its smartwatch version of Android) and draw app developers to its software, much as it did with Motorola and continues to do with its Pixel phones.

For Google (now officially known as Alphabet), the acquisition of Motorola was a response to an existential threat – the increasing adoption of smartphones. If the company hadn’t found a way to make its search engine easily accessible on mobile devices, it could have been shut out of the market. Even with the prevalence of Android (our most recent VoCUL survey showed that nearly 40% of current smartphone owners have an Android phone), Google has paid Apple billions of dollars to be the default search engine on Apple devices.

Google’s purchase of Fitbit is far smaller than its $12.5bn reach for Motorola. And that’s, well, fitting. Although it’s important to Google that its OS gets into every major compute interface, smartwatches haven’t yet gained the kind of traction that smartphones have enjoyed. According to VoCUL, 10% or fewer respondents typically say they plan to buy a smartwatch in the next 90 days, whereas the smartphone market tends to be 10-20% in recent quarters, and higher when the category was less mature.

For those seeking a more detailed view of wearables, the broader IoT market and its impact on M&A, 451 Research will be hosting its Cycle of Innovation Summit in Boston next Tuesday morning (11/5). 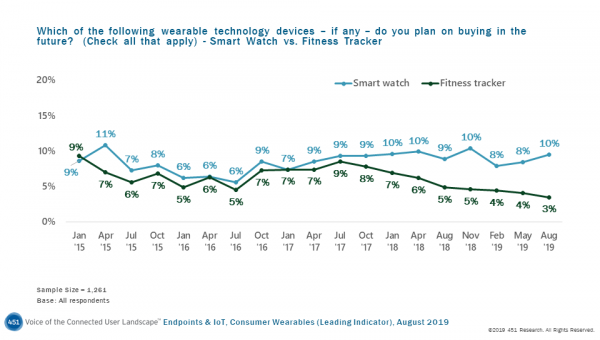