Dealmakers are forecasting a frosty follow-up to an unusually chilly summer for the tech M&A market. In the latest iteration of the M&A Leaders’ Survey from 451 Research and Morrison & Foerster, respondents handed in the most pessimistic report we’ve seen in any previous fourth quarter.

The 40% of tech M&A practitioners that told us deal activity would increase represents only a slight drop from our year-ago reading, when 43% predicted an increase. Yet in this survey, 28% said deal activity would decrease, nearly double the rate of the previous survey and only the second time that more than one in four respondents have forecast a decline.

The results come as acquirers delivered their lightest level of spending on tech M&A targets in two years. As we discussed in our most recent quarterly M&A report, summer spending on tech M&A targets dropped 25% below each of the previous two quarters. Even many of those respondents projecting an increase in deals didn’t put forth a rosy outlook on pricing. At a rate of five to one, respondents predicted that private company M&A valuations would decrease in the next 12 months.

Prices have already fallen a bit from last year’s record levels. According to 451 Research‘s M&A KnowledgeBase, among private tech vendors selling for $100m or more, the median multiple stands at 5x trailing revenue in 2019, down from 5.3x last year.

We’ll publish the full analysis of the fifteenth edition of the M&A Leaders’ Survey from 451 Research and Morrison & Foerster survey later today. The report, available to subscribers to 451 Research’s Market Insight service, will also include the outlook for private equity, strategic and crossborder acquisitions. 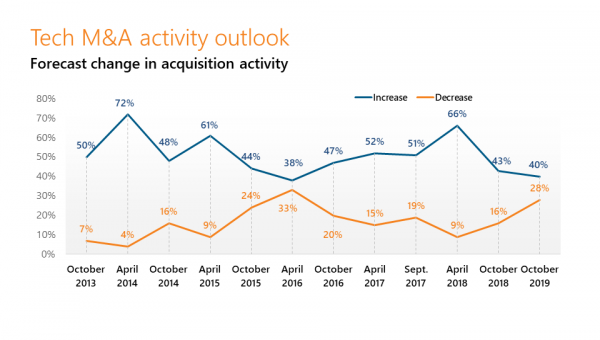