Private equity (PE) exits are declining faster than at any time since the financial crisis. The change comes, in part, as PE firms, the most prominent source of exits for their peers, are slowing their purchases (a trend we covered recently). Yet it’s the disappearance of strategic acquirers that is most responsible for diminishing sales of PE portfolio companies.

After four consecutive years of growth, sales of tech vendors owned by PE shops are on pace to drop 24% from last year’s high. The rise in secondary deals (sales of companies from one sponsor to another) drove most of the previous year’s accelerating pace of exits (and now account for almost two of every three acquisitions of PE-backed vendors). But the vanishing strategic buyers are responsible for the largest decline in PE exit volume.

According to 451 Research‘s M&A KnowledgeBase, 2019 is likely to become the first year since 2014 when strategic acquirers purchase fewer than 100 companies from financial sponsors, doing 34% fewer pickups of PE portfolio vendors than last year. Yet this isn’t part of an overall falloff in strategic M&A – those buyers are printing overall tech transactions at roughly the same pace as last year, our data shows.

But the types of deals they’re doing have changed. Strategic acquirers appear to have lost much of their appetite for the high-multiple growth companies that have become a staple of PE tech M&A in the past couple of years. So far this year, we’ve only tracked 72 acquisitions where a strategic buyer paid 4x trailing revenue or more, roughly 20% fewer than they did at this time in 2018.

The shift away from the expensive end of the tech M&A market comes as the number of businesses missing their sales targets continues to expand throughout this year. According to 451 Research‘s Voice of the Enterprise: Macroeconomic Outlook, the number of respondents who say their organization’s revenue is ahead of their sales plan has dropped each quarter since September of last year. In the most recent edition of that survey, more respondents (24%) said sales were below plan than those that said sales were above plan (18%) for the first time since early 2017. 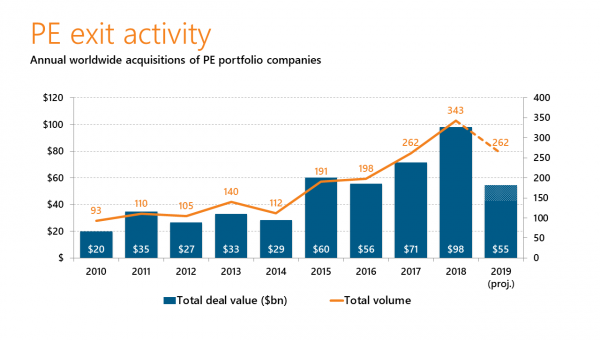