Repelled by rising stock prices, private equity (PE) firms are on pace to print the fewest take-privates of tech companies in five years. The deals that are getting done this year involve, more often than not, businesses that have fallen off their recent highs. Yet many are still commanding premium valuations.

According to 451 Research‘s M&A KnowledgeBase, buyout shops have acquired 10 NYSE- or Nasdaq-traded vendors this year, setting the stage for the fewest such transactions since 2014, when they purchased just 12 (there are typically 20-25 such deals annually). The Nasdaq has risen 25% since the start of the year, although our data suggests that sponsors are reaching for targets that haven’t benefited from that by picking up companies whose share prices have fallen below their 52-week highs.

Take last week’s announcement that HGGC would purchase Monotype. The $820m transaction, at $19.85 per share, is almost 10% below the stock’s highpoint over the past year. It’s not alone. Per-share prices in seven in 10 of 2019’s take-privates landed below their 52-week high. An eighth vendor, Ultimate Software, edged out its high by less than 1% in its $11bn sale.

That’s not to say these companies are going cheap. Ultimate, for example, sold for 10x trailing revenue. And Monotype, despite the turbulence in its stock, was still able to fetch 3.4x. In fact, our data shows that the median valuation for these take-privates is running at 4.1x, its highest point in this decade. Although PE firms have increased what they’re willing to pay, stock prices might just be increasing faster. 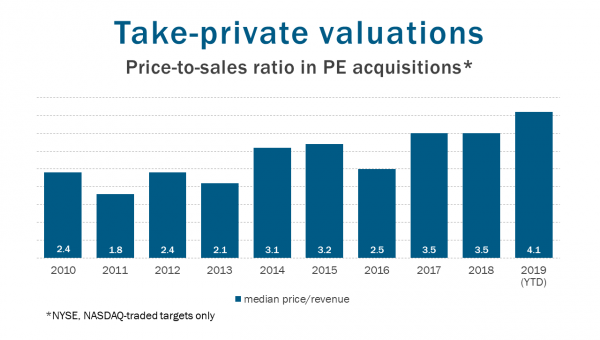