With Vista Equity Partners’ acquisition of a majority stake in Acquia, private equity (PE) firms are now on pace to deliver as many exits to VC funds as the previous record year. It’s appropriate (although maybe not surprising) to see a deal by Vista pushing PE purchases of startups toward a record streak – it has bought more of them than any of its peers.

According to 451 Research‘s M&A KnowledgeBase, Acquia marks Vista’s 55th acquisition of a venture-funded company since the start of this decade. Only Cisco, Google and Microsoft have picked up more startups during the same time. And this year, Vista has been far more prolific, having printed nine such transactions, compared with six each from 2019’s next-most-prolific buyers of startups (Microsoft and VMware).

Last year, PE firms purchased 147 startups, 53% more than any other year, our data shows. With today’s announcement, sponsors are on pace to match that total, having bought 108 so far. In the overall tech M&A market, buyout shops are on pace to print 5% fewer deals than they did last year. The decline itself is hardly noteworthy – even if the year ended today, PE firms would have acquired more tech vendors in 2019 than they did in all but two other years.

But the growing ratio of VC-backed companies does show that the PE playbook continues to swing toward buying growth companies and adding value to them through bolt-on acquisitions. There’s every indication that Vista will run that playbook on Acquia. It’s a common strategy for Vista – of its 55 purchases of startups, 36 have been acquisitions done by its portfolio companies. Also Acquia, an open source content management software developer (subscribers to the M&A KnowledgeBase can see our estimate of Acquia‘s revenue here), has recently become an acquirer in its own right, having inked two transactions since May. 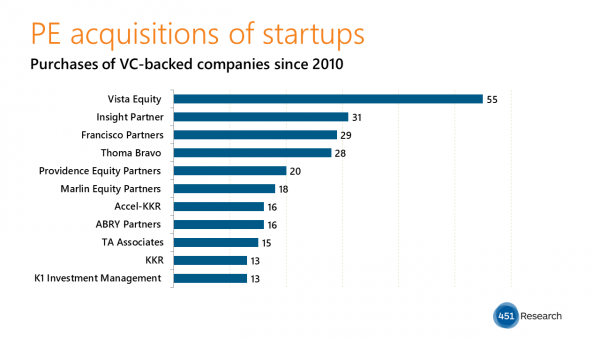