As we saw in this week’s offering from Ping Identity, there’s virtually no middle ground for IPOs from the information security (infosec) market. More than any other tech segment, infosec prices its chosen few at astronomical heights, while relegating the rest to a far more earthbound valuation.

Broadly speaking, on a price-to-trailing-sales multiple, infosec IPOs inevitably come to market at either a high-single-digit valuation or at greater than 20x. Nothing in between. None of those deals that price at twice the low end, but half the high end. As a result, when we survey the IPO valuation landscape, we see a very unusual distribution: cybersecurity tends to stack up in two camel-like humps rather than a conventional bell shape.

According to our analysis, Ping is the ninth debutant from the infosec market on US exchanges in the past two years. (See our full preview on Ping‘s offering.) The identity and access management vendor created some $1.6bn in (undiluted) market value in its IPO. That works out to about 7.5x its trailing sales of $215m through midyear.

Ping’s price-to-sales valuation slots right next to the current trading multiples of other recent infosec IPOs such as Tufin Software Technologies (6x), Tenable (7x) and SailPoint Technologies (7x). (SailPoint, like Ping, came public from a private equity portfolio, after being acquired for a fraction of its current valuation.) Similarly, Carbon Black, which came public last year, is being erased from the Nasdaq by VMware in a deal that gives the endpoint security provider a terminal value of 9x trailing sales.

Further out on the histogram of trading multiples, there are the vertiginous valuations of Okta (25x), which came public in 2017, as well as last year’s entrant Zscaler (20x). Both of those are bargains compared with CrowdStrike, which listed three months ago and currently trades at twice the multiple of either of the other highfliers.

Of course, valuation is always relative. Even as some of infosec’s recent debutants look longingly up at the market caps and multiples of others in the industry, there are whole sectors of IT that would gladly take the valuation of a ‘left behind’ infosec vendor like Ping. For a great number of tech startups, even the lowliest infosec valuation would be a trade up. 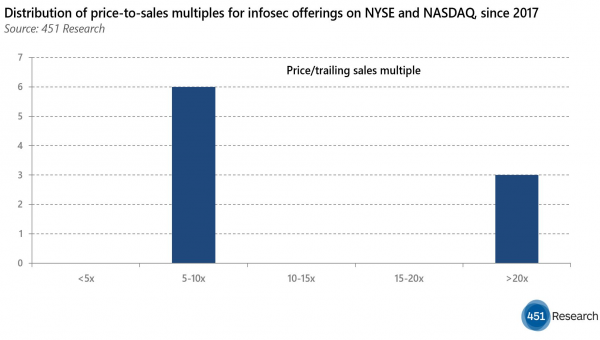