The enthusiasm for enterprise technology IPOs continues unabated as Cloudflare rips past its private company valuation in its first day of trading. The network services provider priced above its range and jumped up from there when it opened on the NYSE, benefiting from a continued demand for new offerings.

Wall Street saw a few rough patches over the month between the time Cloudflare unveiled its IPO paperwork and the first day of trading – the S&P 500 dropped 2% on two separate days. Yet the overall direction has been in its favor, with that index having risen nearly 3% over the past four weeks and Cloudflare’s competitor Fastly, which had been one of the worst-performing enterprise IPOs of the year, rising more than 90% during that period, leaving today’s offering with a higher comp.

As we noted in our coverage of Cloudflare‘s IPO filing, it needed to garner a 12x trailing revenue multiple to move past the price of its series D round. About an hour into trading, it could boast a 23x multiple. That takes Cloudflare well past Fastly, which trades at 16x, highlighting the public market’s penchant for growth. Cloudflare, the larger of the two, expanded its topline 48% year over year in its most recently reported quarter, compared with Fastly’s 34%. 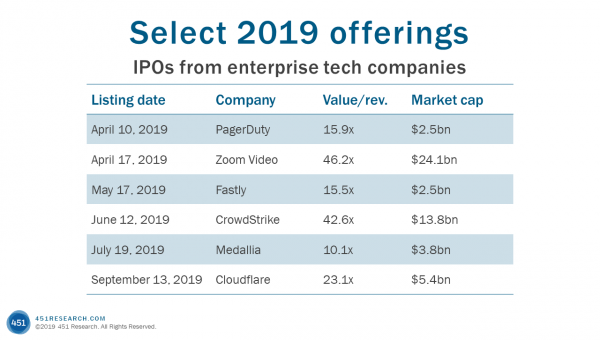